With the release of Splatoon 3, I was excited to get some games down when I found out a team of programmers had created the s3s package to download the statistics on your matches and use them on the stat.ink website. I tried it out and downloaded my available history (last 50 matches) to JSON files. With these files at hand, I started having a go at using them to perform analyses upon the data.

The first thing to do was to take a deep dive into the raw JSON files. This was a somewhat hard task, as some of the structures were nested up to 8 levels deep and there was no documentation on them. Fortunately, most of the structures names were fairly intuitive for someone who has played splatoon for a while.

From these extremely thorough structures I set off in the adventure of making the most of it without getting lost in the forest of details and keeping the scope of the project somewhat concise. With this in mind, I decided to go for a structure that would allow for the analysis of player statistics like kills, deaths, wins, ko’s; over time, stages, match-types, etc; and in a way that would allow for the filtering and reshaping of the data to do more analysis.

Initially, I wanted to parse the JSON files directly into the players’ objects, but then I realized that this would generate duplicate data, as it might be the case that multiple players you want to analyze are part of the same battle. This is exactly my use-case, as I play with my friends and would like to analyze the whole data from the battles we all play together. To have a middle-ground between the huge JSON files and the player objects the first step was to define a battle class so that all the data could be serialized to unique files.

As this is the lowest-level class, it has to hold the most amount of raw information so that wrapper classes are able to do flexible analyses. After looking for a while at the JSON structures, I decided I wanted the following data from each battle for each player involved:

More categories can be added later on if necessary, but it’s a good first step towards getting some interesting information processed. To store these data from the JSONs, it is processed and stored in dataframes within the class separated by “allies” and “enemies”, where the teams are relative to the player who “owns” the battle data (the one whose credentials were used to download the files). A somewhat annoying side-note is that for the tri-turf battles to be possible, the enemy teams are stored in a list of dataframes, unlike the allies one which is just a dataframe, but this is taken into account in all the methods of the class.

Finally, a couple of notes:

This class is the one that does most of the interesting things in terms of data analysis. A player is instantiated with its in-game name and the path to the battle files from which the information will be extracted (user id support will be added in the future). Once this is set, the class automatically parses the player’s history into a dataframe, which takes a for such as the following:

This is one of the main structures that is used in the analyses, as it contains a ton of information about the player’s performance in all the matches, so it can be used to do some quick visualizations and trends analyses. The class also auto-separates dataframes by battle type, to make quick processing of specific data easier; along with general statistics for the player both in aggregate, and by battle type (such as total/average/per minute: kills, deaths, assists, paint).

Finally, the class also contains a battles records attribute, in which all the battles of which the player has been part of (as owner, ally, or enemy) are stored in case some different processing is needed.

But enough code-structure talk, let’s go through a demo (for people interested in more details of the program, please have a look at the documentation for further details and examples).

I’ve been storing and tracking my data through the past month or so. Whenever I finish a 2h session I simply run the following command on the s3s scripts folder:

This downloads my most current JSON battle data (up to 50 battles) into that folder (~/Documents/GitHub/s3s/ in this example). The s3s codebase automatically generates a different folder each time I download the data, so I can safely just run the script each time I finish a gaming session and it just stores it in the same base directory with a new nested folder so that all the historic data is preserved (it doesn’t matter if there are duplicated or overlapping battles data, as that’s handled by SplatStats).

Now, let’s jump into python to import our packages and setup our input path (where the JSON data folders are stored), and the output one (where we will be exporting the battle data files):

Now, the following lines parse the JSON files paths, extract the battle objects from them, and return the paths of the serialized battle object files:

Ok, enough parsing files, let’s create our player! In my case, I know my player name but in case you’re not sure, or if it has strange characters just run:

and your username should probably on top of the list.

With this in place, let’s instantiate my player, and extract the battle history:

And we’re all set to do some cool analysis! Let’s say I was interested in the “Turf War” matches I played with my Splattershot and killed more than 15 enemies whilst dying less than 5 times. We can do this easily with some standard dataframe filtering:

Moreover, we could further filter this result to have a peek at other things such as the gear I was using at that point:

Now, let’s do some plotting! There are some dedicated functions to do basic analysis. One of this is the frequency distributions of kills and deaths during matches, which can be plotted as follows:

This graph shows us how many kills we get on average in a match (top) against the number of times we die in it (bottom). In my specific case it can be seen that, on average, I tend to get more kills than deaths in any given match with some extreme outliers around the 35 kills mark; whilst the mode of the times I die during a match hangs around the 4 region.

Now, we can also analyze several stats broken down by match type and stage:

Which can be pretty useful when breaking down on which stages we perform the best. In my case I tend to lose a lot in “Scorch Gorge” during Rainmaker matches, which I can totally understand as I struggle badly in that stage.

These stats can be any of the following (and others can easily be extended) for any of the match-types (including the aggregate of all):

Other aggregations such as weapon-type are possible. Have a look at the docs for more examples!

Finally, for my two favorites: the iris plot and the matches history one. These two show the kill to death ratio as a bar (or line) which is blue if the player got more kills than deaths, and magenta otherwise. Rectangles on the back represent the painted surface. In the iris plot matches are temporally distributed clock-wise and the kills/deaths are radially shown with a symlog scale by default: 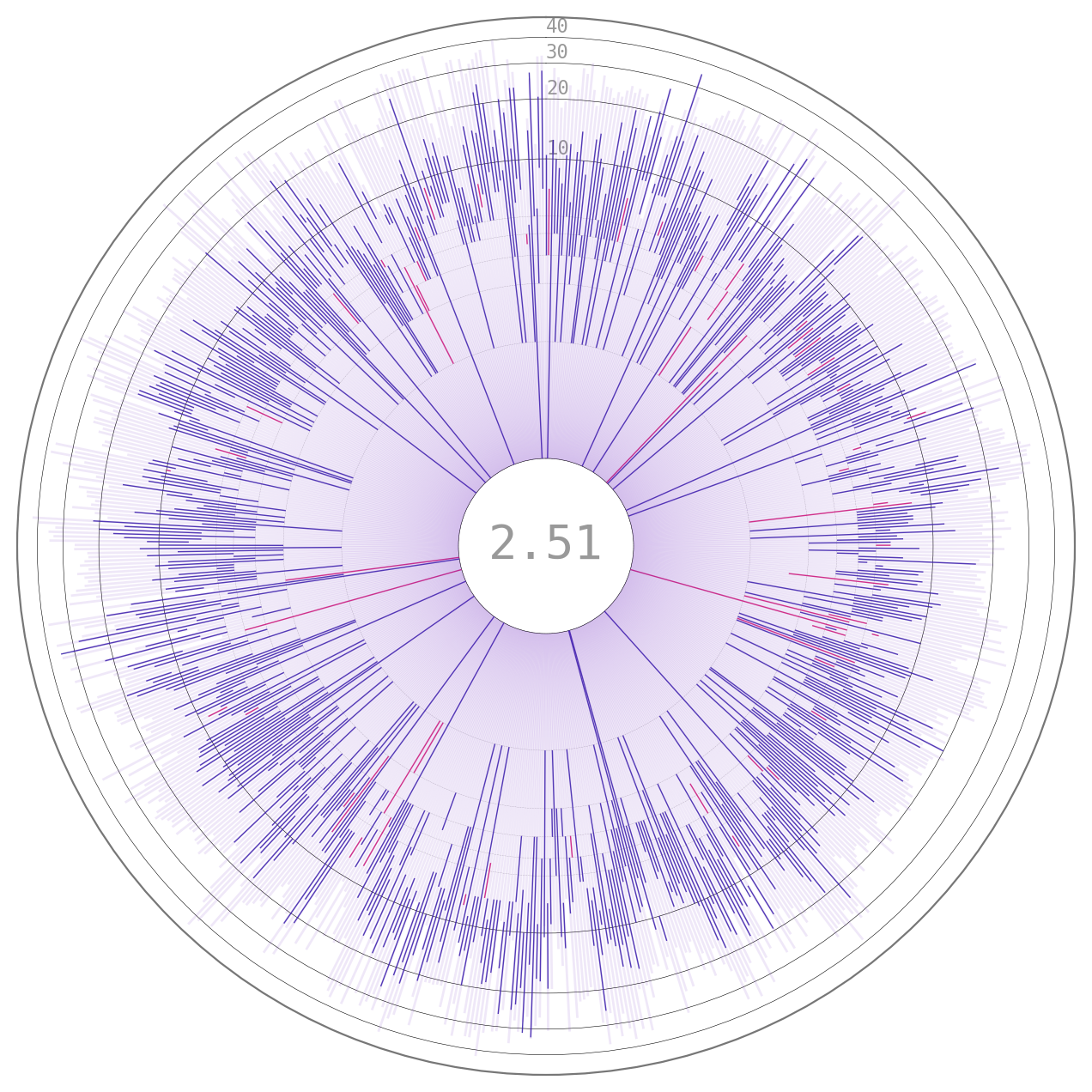 The number at the center is the result of the following calculation: \((kills * 0.5 assists)/deaths\); which in my dataset is around 2.5, which makes sense as I usually play under the “slayer” style.

The matches history plot contains even more information, with the match-type, weapon used, if it was a KO, splatfest, win or loss; all in the same display! Have a look at the full explanation for more details!

That’s it for this example. I’ll be updating the framework and extending its capabilities but for now have a look at the full code used to create this demo!

The next feature I’ve been working on is the “Team” class with which I will try to make the analysis of groups of people more straightforward. Once that is done I plan on improving the aesthetics of my plots and looking into integrating parts of the s3s data-scraping capabilities into pipelines that automate the data download to make the whole process more automated. Finally, I want to work a bit more on features like breaking down the team compositions that get the most wins/losses to analyze and improve my gameplay.